The Muewkma Ohlone people inhabited the lands from the San Francisco Bay to the lower Salinas Valley. In San Francisco, there were villages 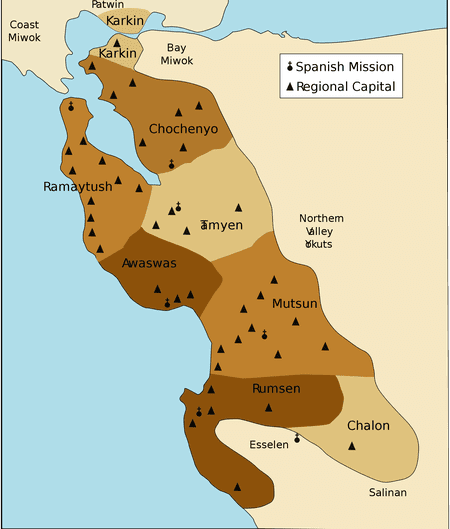 located at today’s Fort Mason, Crissy Field, and Sutro Baths. The groups freely interacted with one another and usually moved annually between temporary and permanent village sites in a seasonal round of hunting, fishing, and gathering. They also used the practice of periodic burning of the landscape to promote the growth of native grasses for seed gathering and to create forage areas for deer and elk. Some of the closest neighboring tribes were the Coast Miwok people who inhabited both Marin and Sonoma country to the north.

Each of the 50 or so tribes had around 50 to 500 members and the groups often used inter-tribal marriage to strengthen tribal bonds. The average Ohlone Indian survived off of a diet that mostly consisted of crushed acorns, nuts, grass seed, berries and trapped fish or game. Most of the tribes built dome-shaped houses of woven or bundled mats of tule (Schoenoplectus acutus or common tule). The groups also crafted boats of tule which they used to navigate the various waterways around the bay. Most of the tribes were believed to have practiced some form of the Northern California Kuksu religion, which often featured rites of passages and village medicine men.

Shellmounds or shell middens, were comprised of abalone, mussels, and clamshells, staples of the Ohlone diet, along with sediment, ash, and rocks. Over time the mounds grew larger and taller from successive use with an accumulation of shells, animal and human remains, ceremonial burial objects, artifacts from everyday use, and architectural remains.

The Emeryville Shellmound was a highly remarkable historic, cultural, and sacred site established by Ohlone tribe over centuries of use from 500 B.C. to approximately 1700 A.D. It is the site of last existing shellmound in the Bay Area, now a dedicated memorial.

There Were Once More Than 425 Shellmounds in the Bay Area. Where Did They Go?  Article by KQED discussing the Bay Area shellmounds and their disappearance.

Phoebe A. Hearst Museum of Anthropology houses more than 350,000 catalog records of California Indigenous Peoples.  Including  Nels C. Nelson's 1909 photographs of the shellmounds.

The National Anthropology Archives is a good starting point for research.  Type Ohlone in the search to see images, videos and sound recordings.

Santa Clara University Department of Anthropolgy Research Manuscript Series is a project to document contact between indigenous and foreign peoples, plants, and animals.  Use the search bar on the right hand side to search for manuscripts regarding the Ohlone people.

Native California Collection at the de Saisset Musem at Santa Clara Univeristy includes a California Stories from the Thamien to Santa Clara exhibit. The exhibit features huts, baskets, stoneware, and boats contemporary to the pre-contact era, or recreated by modern Ohlone craftspeople.